Disclosure: In return for this post, I dined here free of charge. But don’t worry, the excitement portrayed on this page is still very much my own!

Back in my pre-vegan days, I was a huge fan of Mimi’s Bakehouse. This café specialises in all things sweet, with big beautiful treats ranging from cupcakes and brownies to crunchy slices and victoria sponges. I used to live for their baked goodies, but when I turned vegan I assumed I would never be able to go there again.

It started last Christmas when I spotted a vegan cupcake in their hut at Edinburgh’s Christmas. Then I saw them take up an entire stand of vegan cakes at the Scottish Vegan Festival in April. Turns out they have been experimenting and building their vegan range for quite some time. Now, this summer, they have launched their very own vegan afternoon tea! It’s safe to say, I am very excited.

It’s safe to say, I am very excited.

Their vegan afternoon tea is available now at The Shore and at St John’s Road in Corstorphine. It is still quite new so you need to give at least 48 hours notice (just so they can get all the specialist ingredients in), and you may be asked for your credit card details to secure your booking.

As well as the vegan afternoon tea, Mimi’s Bakehouse have a range of vegan options on their menu and always have at least one or two vegan delights in their cake selection each day. At the time of writing, the vegan menu contains:

But enough about that. Onto the afternoon tea! 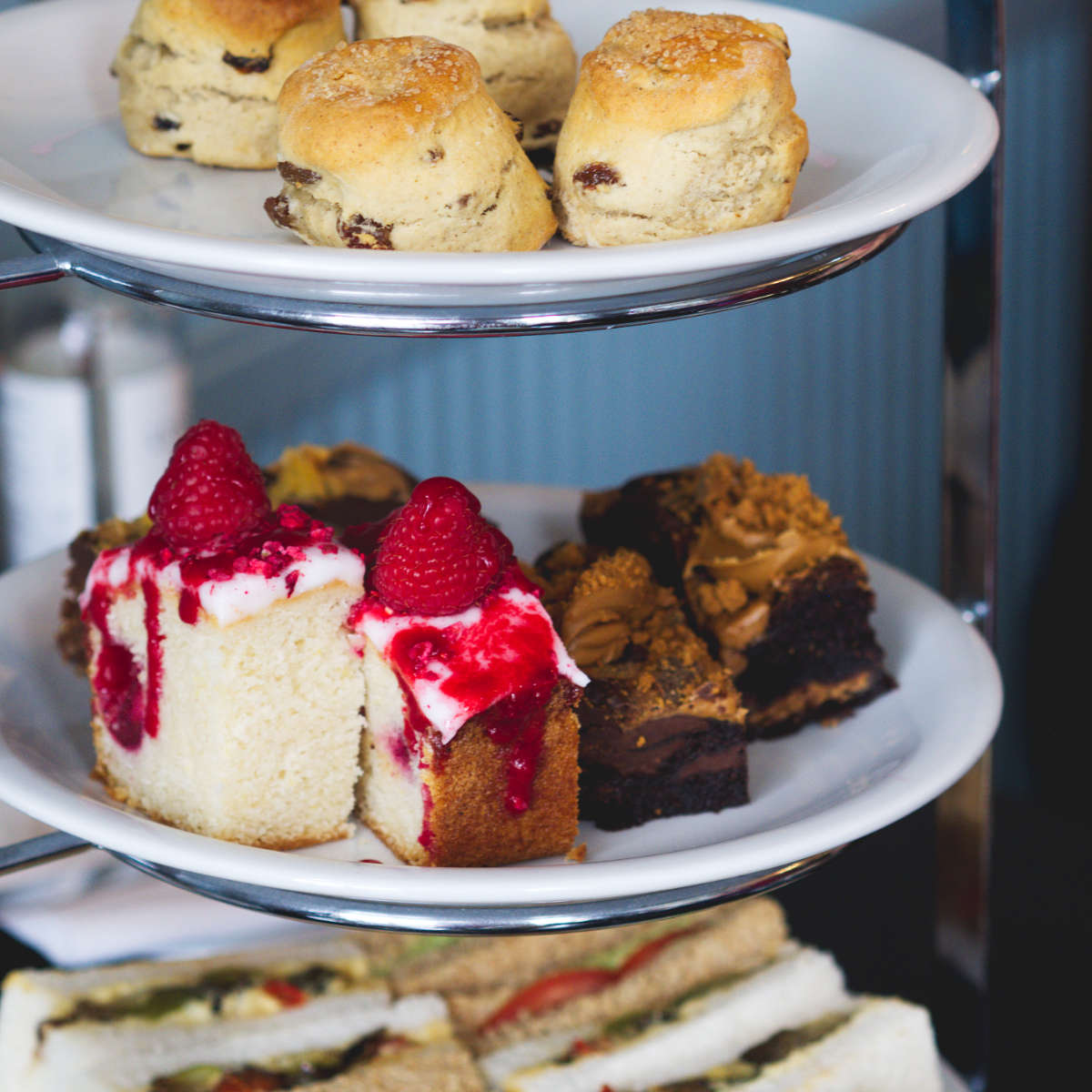 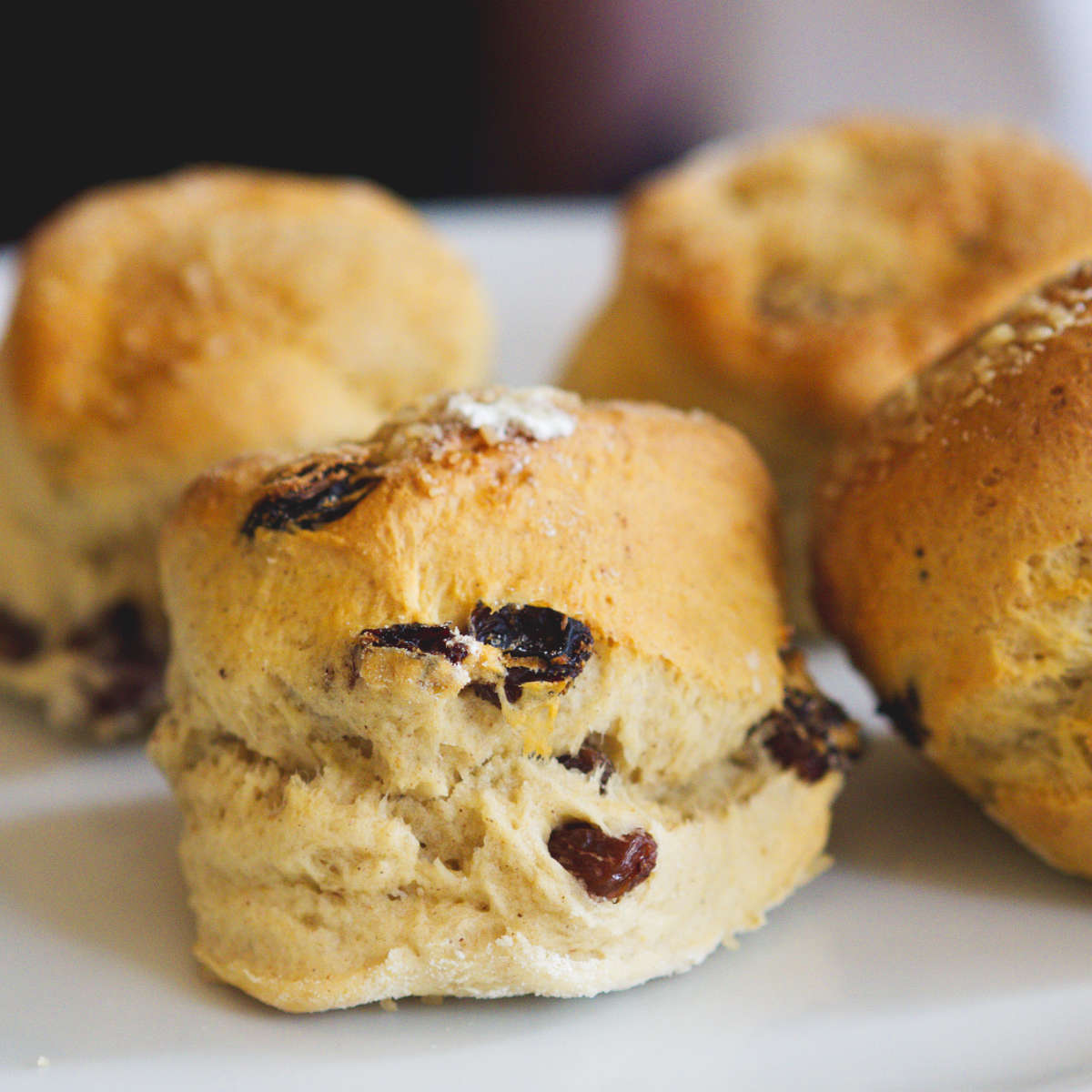 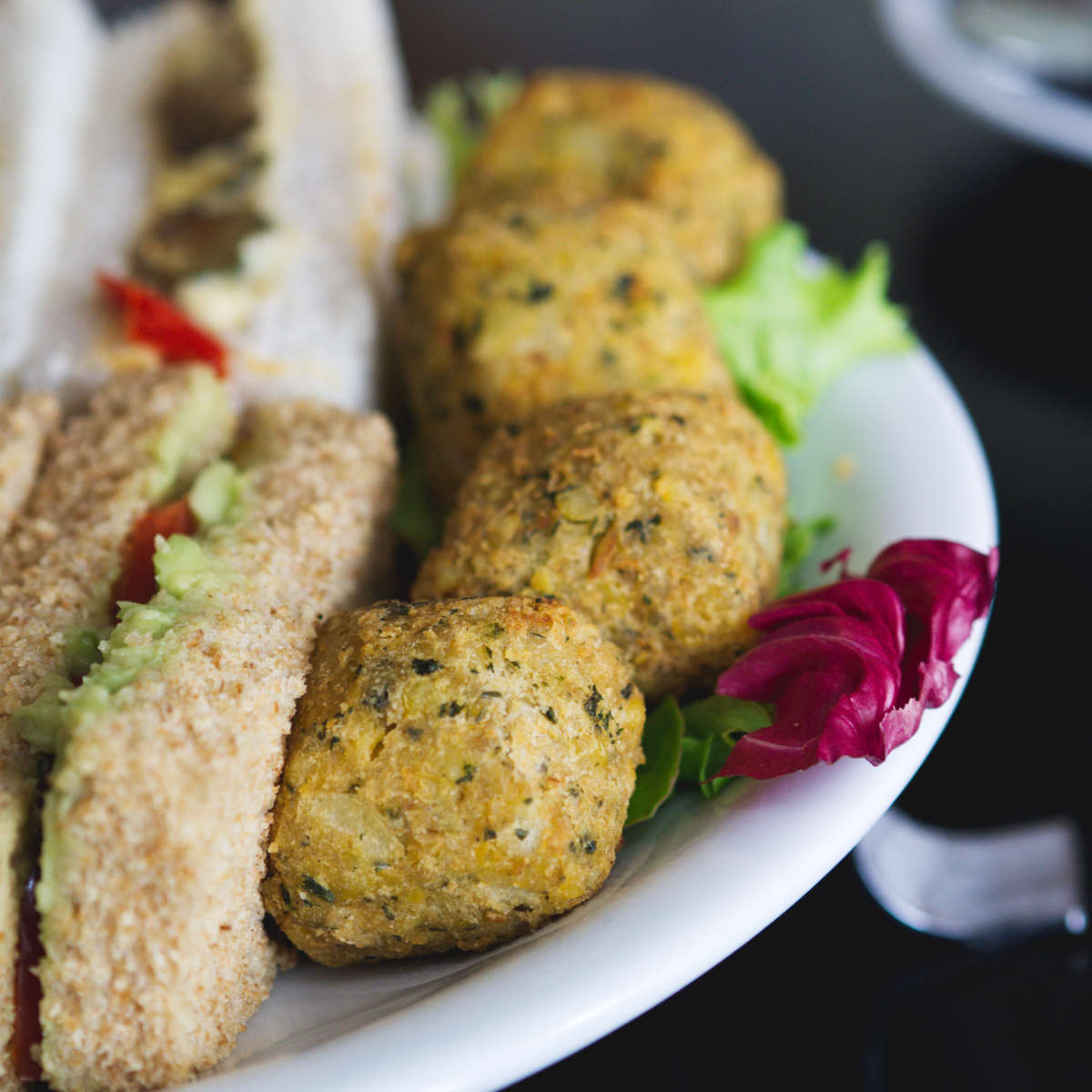 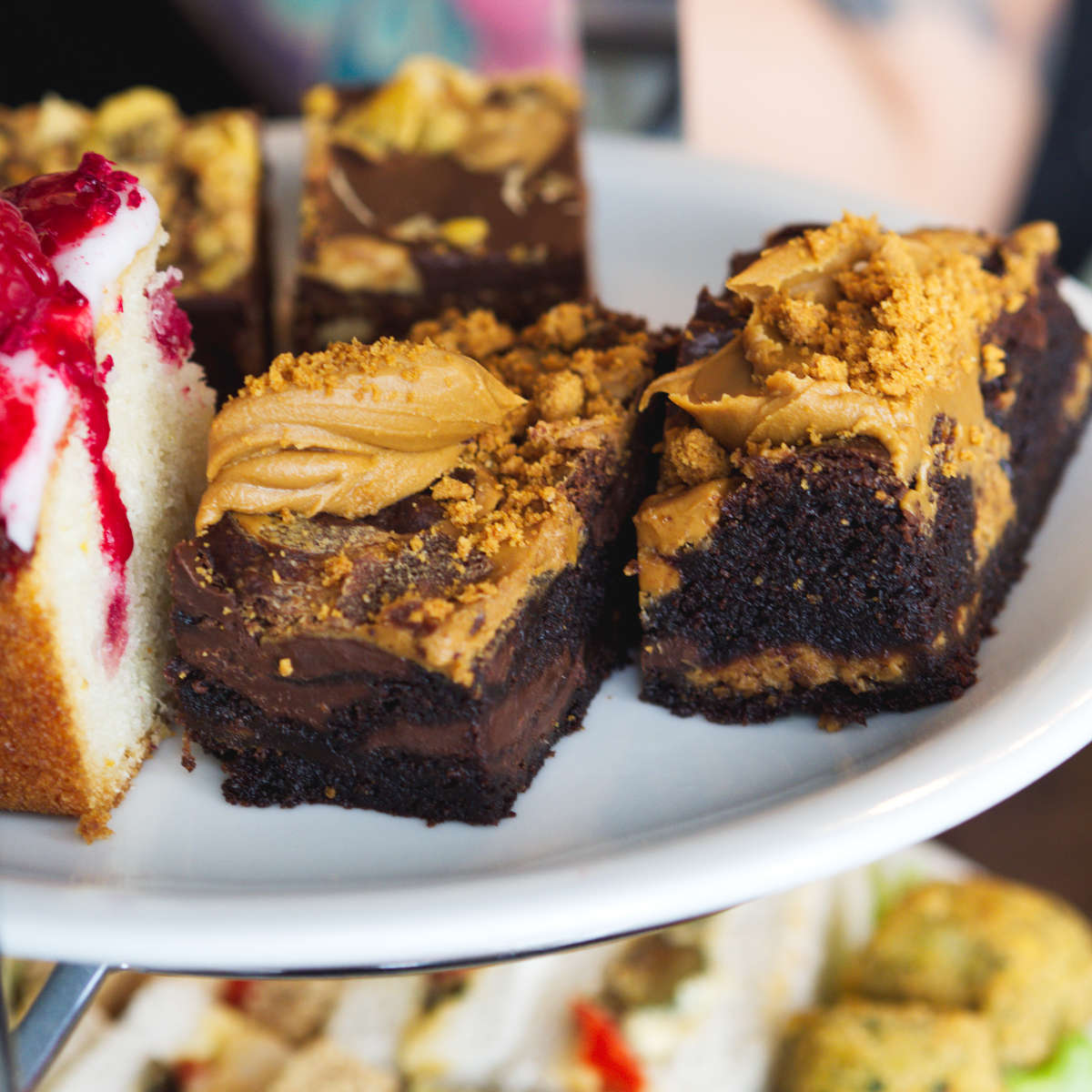 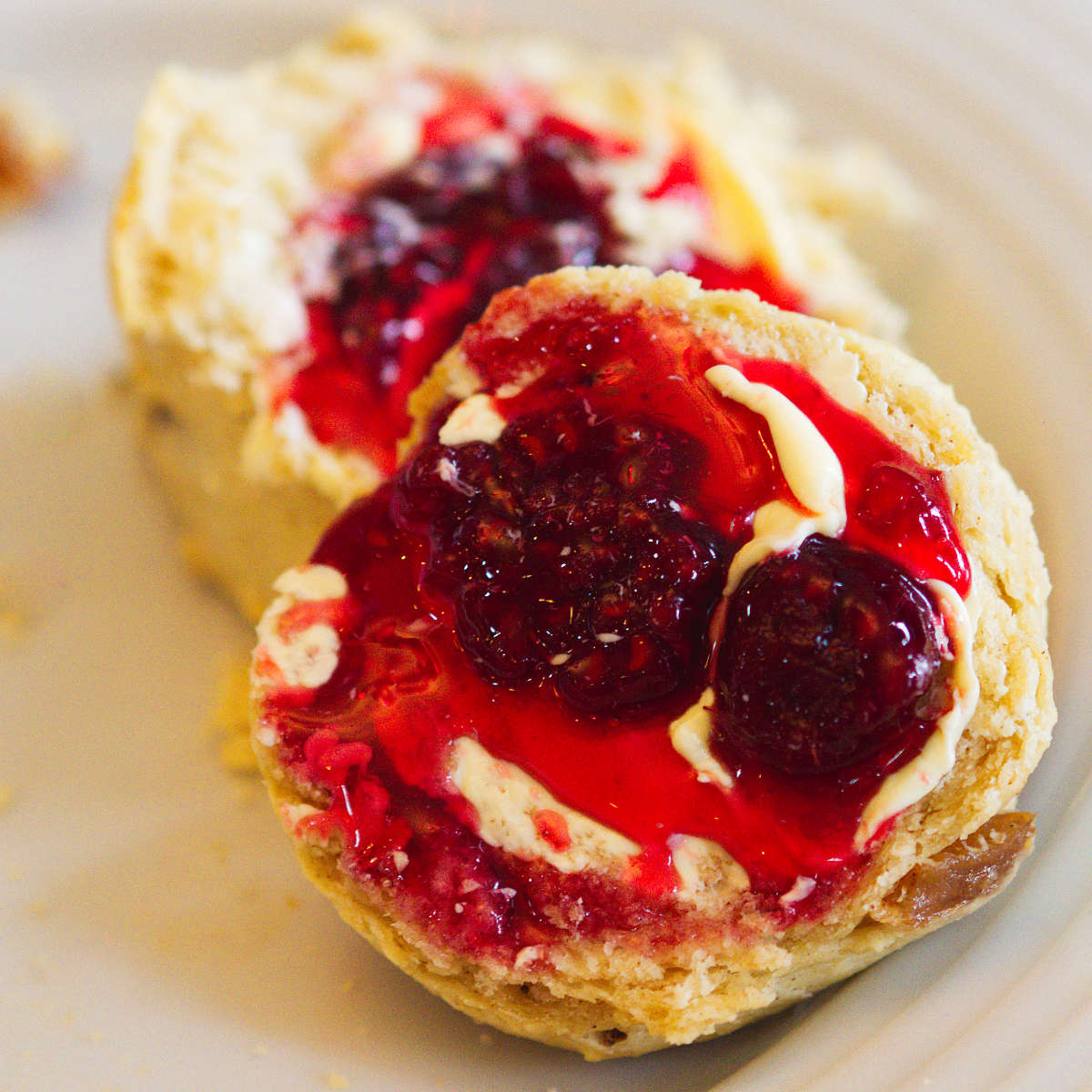 The vegan afternoon tea consisted of three ‘layers’: the savoury layer; the sweet layer; and the scone layer. Word of advice: don’t eat before you go. You want to go to this thing HUNGRY, all right? If you still find yourself defeated by the colossal offering, then Mimi’s will put whatever’s left in a doggie bag to take away. Waste not, want not!

On our visit, the savoury layer consisted of two different finger sandwiches and four balls of freshly warmed falafel. The sandwiches were filled with avocado and tomato, and hummus with roasted vegetables. From the savouries, the falafel was definitely my favourite. The bites were warm, tasty and incredibly moreish. I could have quite happily devoured an entire plate of them, but I still had to save room for the sweets and scones!

The vegan scones were small and cute, served with vegan butter and jam. They had a bit more of a flourish than your regular scones with fruit throughout, sweetly spiced and a little sprinkling of brown sugar on top.

Then finally onto my favourite layer: the sweets! Sweet stuff is what Mimi’s Bakehouse is known for and trust me, they did not disappoint. This layer had three sweet treats, all very different: a Snickers crunch bar, a slice of the lemon and raspberry loaf, and a chocolate Biscoff traybake. The chocolate Biscoff traybake was my personal favourite, but the texture of the Snickers crunch bar also deserves an honourary mention.

All in all, a very strong effort from Mimi’s Bakehouse. It’s fantastic that such a mainstream popular face on the Edinburgh foodie scene is catering for vegans. I am so happy that I can finally dine at Mimi’s again. I’ve said it before, but it’s truer now than ever: there’s no reason for vegans in Edinburgh to miss out on the sweeter things in life!

We enjoyed our sumptuous vegan afternoon tea at The Shore in Leith, but you can also get it at their Corstorphine Branch at 277 St Johns Road and treat yourself to some of their vegan goodies at the Little Bakehouse: 250 Canongate (Royal Mile).

Love it? Pin it for Later! Loving the look of this, loved Mimi on my pre vegan days. Is the vegan afternoon tea just the same price as the regular one? I need to come over from Glasgow anyway 🙂
Thanks, Sanna Vegancruiser

Yes it is, but you do need to book in advance so they can get everything ready. It’s well worth the trip! 😉